Last night I went with some friends to the Brewhouse and Kitchen in Islington. In truth we were actually there for their Monday night pub quiz. We had been threatening each other with it for the last few months and had finally decided to bite the bullet and put our general knowledge to the test.

We arrived slightly early for a pre-quiz dinner. My friend ordered the Steak and Ale Pie and I knew that if I didn’t get it too I would suffer from pie envy. So that’s what I did. He rolled his eyes and considered my logic mildly ridiculous, while I considered the notion that he might share his pie with me, decidedly improbable.

I wasn’t disappointed. I had ordered well. A pie crust landed in front of me that was crunchy and flaked on the fork. The lid was a puffy cloud of pastry goodness, and the filling was nice chunks of meat and little button mushrooms in a thick slightly peppery gravy. I really enjoyed the whole baby carrots which were buttery, perfectly cooked and mingled with the saltiness of the greens. The creamy mash provided the perfect foil. It was a pie that the doctor might have ordered to get me in a good mood.

The place is just a pub, with pub food, but it has a really nice chilled out vibe and comfortable decor. It also had perfect noise levels for socializing. From what I saw the food was generally pretty great and on point. The staff also seemed really happy to help and wanting everything to be just right.

I bet you’re just dying to know how we did in the quiz? (Probably not, but I’m going to tell you anyway). We came second, by one point. ONE POINT! We incorrectly answered some stupid question about Elizabeth Taylor and were pipped at the post by another team.

Second is definitely a respectable outcome, though not winning meant that we also missed out on a sixty pound prize pool which was unfortunate.

At least I was a winner with the pie. 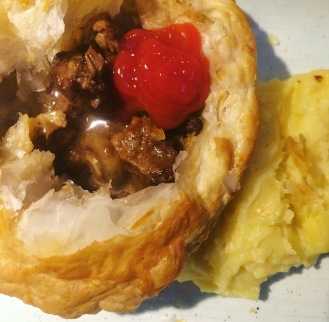