I realized something at yoga yesterday. I really don’t like to om. I don’t even like listening to other people do it. I think I might associate it in my mind with the time my dad went through his weird Tibetan throat singing phase. Not quite as bizarre as the aliens that lived on the planet Nebiru phase, but still…

I guess my real problem with omming (is that the verb?) is that it feels inauthentic. I’m sure other people are able to connect with their spiritual depths and om away without feeling ridiculous. All power to them. That’s just not me. I will sit quietly and pretend it isn’t happening until my thoughts become my reality and it actually isn’t.

The truth is, while I was practicing yoga, in the lovely studio I frequent just of Broadway Market, I wasn’t thinking about finding peace, or my inner child or creating balance in my world. I was thinking about gazpacho. Genuinely. I spent a good seventy percent of the class, (when I wasn’t thinking ‘why am I doing this? Can I stop and go to sleep please?’) craving cold soup.

The moment the class is over I wander over to a place I know on Broadway Market. I’ve past it many times. It’s called Txotx. It’s a Basque restaurant, and even though I know that gazpacho originates in the South, and Basque food is from the North, I figure it can’t hurt to give it a crack. “Is your soup cold?” I ask the waitress as I walk in. She looks at me like I’ve beamed down from another planet “umm… no…” “It’s lentil” she adds, shrugging. I decide to go and sit anyway, despite the disappointment of not getting what I’m craving. A gal’s gotta eat.

Inside, the place feels more spacious than it appears from the street. An open bar leads on to a large table opposite an open kitchen. The kitchen leads to more tables and more again behind glass paneled doors reminiscent of a greenhouse. There are plants on the walls. It’s all green and wood and cream. It’s lovely.

My drink arrives. It’s in a handled jar, and very green with a bright pink straw. The toast is one slice, actually half a large slice, I want it to be a bit bigger, but actually, piled with all the garlicky mushrooms it’s more than filling. I wish I could try some of the other items on the menu but decide that to order them alone would be greedy. I love how the smoothie pops with mint and lemon, and occasionally I get a small chunk of apple or avocado that has escaped the blender. Actually, the smoothie is like a meal in itself.

It’s a nice feeling. Sitting at the large communal table opposite the kitchen watching the chefs move with calm efficiency. Post yoga. People buzzing around me as I gobble up my food. I’m writing, on my phone. My nails click occasionally as they move across the letters on the screen. I’m focused, but also completely relaxed. I have another nibble of mushrooms, sip on my smoothie and am mid mouthful when it occurs to me… perhaps this is my om. 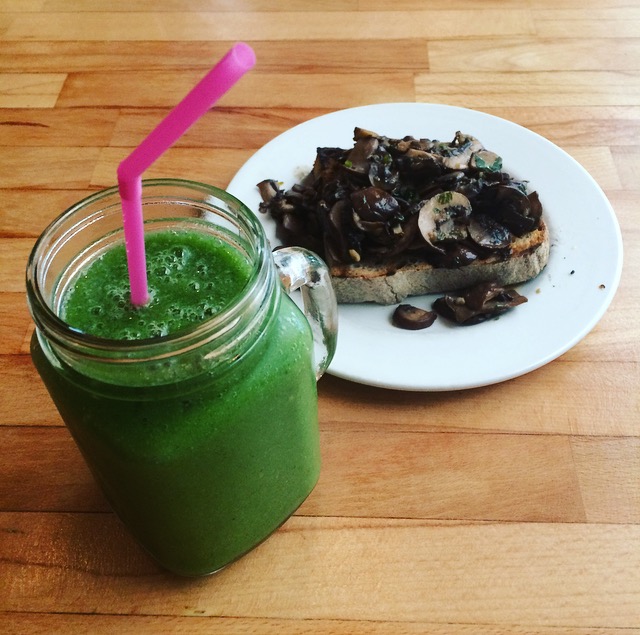