I was just recently in New York, and there was one thing while there I intended to take particularly seriously; the hunt for the perfect Reuben sandwich.

Now, i’m already sold on the American’s ability to make a great sandwich, last time I was there I made the almost religious pilgrimage to Katz’s Deli and ate my way around every bagel joint on the island. But that was two years ago, and as the saying goes ‘you’re only as good as your last hit/film/show/whatever’… I was not going to let New York rest on its laurels.

New York, you’re only as good as your last sandwich. Also, I’m hungry…

And so I make the journey to Eisenberg’s Sandwich shop. A famous stalwart of the New York food scene,who have been proudly ‘raising New York’s cholesterol since 1929’.

I believe them, the place on first entry didn’t look like it had changed in the last ninety years. A narrow pathway with high stool bar seating and Art Deco hanging lights leads to brown and pale yellow walls and furniture, historical photographs, and a slightly less historical poster on how to stop someone choking (I hear the Heimlich maneuver is out of vogue).

I am there with my parents. We order fries (because America) and Latkes (because what self respecting Jew wouldn’t) and then I make the greedy mistake of insisting on getting my own corned beef and pastrami mixed Reuben because once it arrives, it is painfully clear that I will require the info on the aforementioned choking poster if I am to attempt to shovel the entirety of it into my already greedy gob.

Still, I do my best. The fries are really delicious, very crunchy just as I like them, and the latke is the right combination of crunchy on the outside, fluffy on the inside (though I wouldn’t complain if there was more outside crunch (I like things crunchy, sue me!)

The Reuben really is what sandwich dreams are made of. A very healthy portion of sliced pastrami and corned beef, melted Swiss cheese and the perfect amount of kraut and mustard on crunchy toasted rye. Divine. Half of it is divine… the other half is obscene. I eat it anyway. 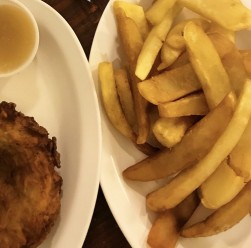 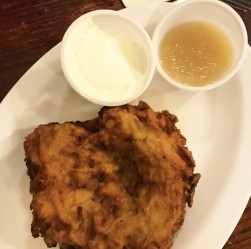 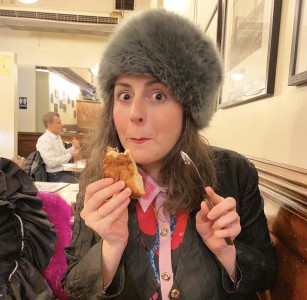