About ten years ago, I spent a weekend in Paris with my parents. I remember that it was the middle of winter, just before Christmas. To say that it was cold would be and understatement. It was ccccooooolllllddd. My mum insisted that we ride around the city on the top open air part of a tourist bus. Mum waxed lyrical about the ‘magic of Paris’, while dad and I slowly froze our asses off.

The highlight of that trip for me was a visit to the Marais district. We went to a traditional Jewish bakery. It was there that I ate the most incredible latke of my life. That’s a Jewish style hash brown for the uninitiated. It was so amazing and crunchy and fluffy and perfect that I never forgot it. Neither did mum.

Fast forward a few years and I am back in Paris with my parents. This time we are staying in the Marais. I love it there. Mum is right when she says that it has a sort of magic about it. The old part of the Marais especially, is a funny sort of place. We very quickly find ourselves walking in ever decreasing circles. Always turning a different way, and inexplicably, inevitably ending up in the same place. It’s a labyrinth. A few hours in, i’m expecting a little worm to come out of the brick work beside me, invite me in for a ‘cup of tea with the missus’, then say “Don’t go that way, that leads straight to the castle!”

Basically, mum and I have a single goal. To find the bakery with the amazing latkes. We walk around and around getting more frustrated at our lack of navigation skills. We are driving my poor dad mad. He doesn’t care if we find the same place, just as long as he can sit down somewhere and shovel food in his mouth. We can’t find it. Perhaps it’s closed. Or a casualty of time and change. Maybe everything just looked different in the winter. We do however find Korcarz. That is where this story begins. 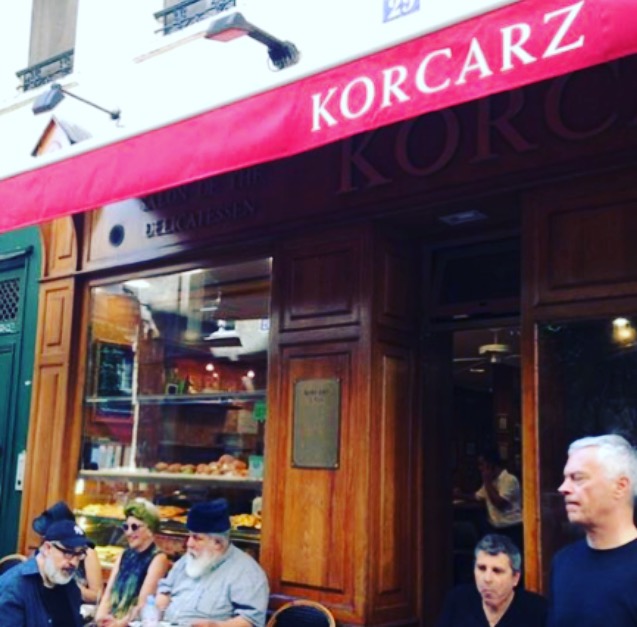 Korcarz is situated in the old Jewish part of the main cobbled street in the Marais. Just down the road from the kosher patisserie, and opposite a falafel shop. It is old school wood paneling and melamine tables. The window displays the offerings of the day. Savoury on one side, sweet on the other. The inside seems a little cramped, lacking in atmosphere, and the outside tables lend themselves to fantastic people watching. Alas, all the outside tables are full.

“Don’t worry” the waiter says, pointing to a man at one of the tables. The man is engrossed in his paper, coffee in hand. He has shoulder length curly grey hair. “He can get up” he continues, giving the man a wave. “After all, he’s not a customer… He’s the owner”. “Ah!” we say as the man now comes to welcome us, his friendly eyes behind round spectacles. “Do you have latkes?” we ask him. “Is the pope Catholic?” he replies.

Finally, we get to sit down and order our latkes. We also get a cheese boureka for good measure. And some herring to round it all off.

The latke arrives. Crunchy and fluffy, with apple puree and a mini israeli style salad. It’s not exactly what I remember from before. It’s missing the whipped cream cheese, and a pickle. Still, it’s pretty close. The latke itself is delicious, perfectly fried but not overly oily. Darker and crisper around the edges with a slightly soft middle where the shredded potato breaks apart on the fork. The apple is a little bit tart, just the way It should be. The salad is superfluous. I eat it anyway.

The cheese boureka is pleasant enough. The flavour is okay, but it’s a little bit chewy. As if it has been heated in the microwave rather than the oven. The pastry doesn’t have the crisp flakiness one would expect. It is a poor cousin to the bourekas I have eaten in Israel. I wonder if I should judge it by the same standards, but then come to the conclusion, that this is France. The home of melt in the mouth croissants. There is really no excuse for below standard pastry.

We are discussing the latke and where on earth the place of our memories went, when a little man taps my dad on the shoulder. “Are you Jewish” he asks. Dad nods reluctantly in a way that, only a non religious Jewish man, who knows what’s about to happen can. “Perfect!” he says, “you can lay tefellin, it’s a mitzvah”. Dad stands up, knowing that protestations are fruitless, and begins to wind the thick black leather around his arm.

It’s now that our herring arrives, and Rabbi Yosef who had been sitting quietly to our left, shoveling food into his mouth, nods his approval and holds up his newly arrived cheesecake. “You must try the cheesecake” he advises us “It’s the best in Paris!” he says with conviction. He puts his cheesecake down and calls the waiter over to order an ice cream. “I sit and graze here all day, every day” he tells us contentedly. ‘Too right” I think to myself.

We dig in to our herring. It’s quite salty and fishy, and it doesn’t have the sweet overtones that I am used to. The potato and tomato does a good job of balancing it all out. I avoid the onion. Dad eats it all. I remind myself to not stand too close to him for the rest of the day.

Meanwhile, who are we to refuse a rabbi’s advice. We order the cheesecake. It’s dense, and a bit crumbly. Real traditional Jewish style. Not overly sweet. Perfect with an espresso. Delightful. We’re all very full, but we work our way through it anyway. Rabbi Yosef has already eaten his cheesecake and is on to his ice cream. He doesn’t seem full at all. In fact, he looks like he could non stop eat for days. Praying must be hungry work. He turns to us, ice cream in hand “Now, let me tell you about my best and closest friend… The fashion designer Max Azaria…” He begins.

We didn’t find the place we were looking for, but we still got our latke and met some fun people along the way. It wasn’t the same experience, it was a new one. A rich and vibrant one. Perhaps if we had found the same place it might not have been nearly as entertaining. A healthy reminder. The only way you can really go is forward.

And the best time to do it is now.