Wine tasting for dinner on a Thursday? Don’t mind if I do!

Last week I was back at Laithwaite’s Wine, under the arches at London Bridge for an exotic and esoteric themed wine tasting. What on earth are you talking about? I suppose you’re thinking. In truth, I wasn’t sure what I was in for this time either. Essentially though, we were getting the opportunity to try some slightly more exotic wines, from unusual places and some made with rare and obscure grapes.

I’m pretty certain that for the most part I still don’t know what i’m talking about, but Grant Hadley, our master of ceremonies extraordinaire is a veritable fountain of knowledge. We started with some bubbles – The Adagio, Franciacorta DOCG from Italy (£24.99).

Apparently one hundred times more champagne is made per year than Franciacorta which is a good indication of how relatively few bottles are produced. Made in the region of Lombardy, it had quite high acidity, high cooling in the alps being a factor of this. I did hear that some had compared it to Krug. I wouldn’t have gone that far, but I did think it was pretty damn delicious, and a perfect start to the evening.

Next up, a Basque country wine. Gozatu 2014, Txakoli de Alava, Spain (£12.49). It’s produced using the Hondarrabi Zuri grape. Grown in very small quantities and native to the Basque region. I thought it tasted a bit like a Retsina, which isn’t my favourite, but I can see how it would pair nicely with a bit of tapas, some antipasto, a fluffy Spanish omelette perhaps, or some cheese and mushroom croquetas.

The Favinia Bianco La Muciara 2013, Terre Siciliane IGT, Italy (£18.99) was very medicinal on first taste, so we opened another bottle. This was better, though it still had a high acidity, quite nutty, and minerally. A little bit funky for my taste in truth. Alternately, I enjoyed the Alb de Purcari 2013, Stefan Voda, Moldova (£16.99). I’ve not often drunk Eastern European wine, so this was a bit of a novelty. It had more expression on the palette than it did on the nose and was made with a blend of Chardonnay, Pinot Gris and Pinot Blanc.

On to the reds and some much needed cheese, bread and olives that materialized like magic on the table (and stopped me being under it!) We tried a Romanian Burebista, Feteasca Negra Shiraz 2015, which was really very nice, especially for the bargain price of (£8.99). The Finca Moratilla, Vidadillo 2009 (£19.99), from Spain was another fun one, made with 95% Vidadillo grape which is virtually extinct. Only two vineyards in one tiny region of Spain produce this variety in the world.

My favourite drop of the evening was the Argiolas Korem 2011, Isola dei Nuraghi IGT, Italy (£25). From Sardinia, it was rich, complex  and very delicious. A perfect end to the night.

It was a great opportunity to try wines of a more obscure and exotic nature, Grant and his team from Laithwaite’s definitely delivered on the evening. As for esoteric? Well, I don’t think I can as yet, count myself among the small number of people that are gifted with a genuine understanding, but it was lovely as always, to learn new things and pretend I was part of the gang.

Also, I would never say no to cheese and wine for dinner…

You shouldn’t either – See the upcoming tastings below! 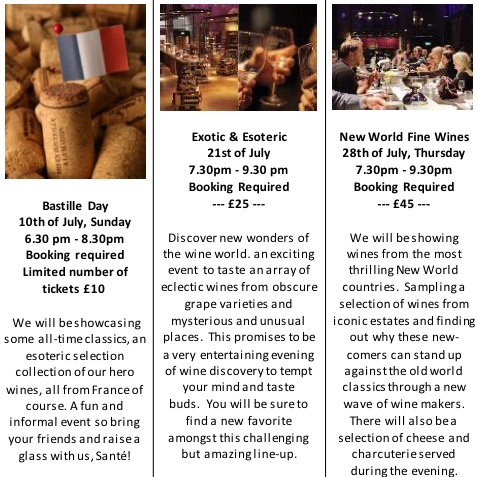