The pastry was spectacular. I bough it from a ‘Joker’ which is a Norwegian supermarket chain. It was the only one of it’s kind and it sat on the shelf yelling my name. The coffee was terrible. It was bought from the self service machine and was burnt. It was improved marginally when drunk with the custard tart. Served me right.

What can I say, I was desperate.

Okay so it was mildly gluttonous to stuff a pastry in my face and then follow it almost immediately after with a ‘piece of cake chaser’ but I will defiantly stare down anyone that chooses to judge me. It was a raw chocolate and peanut butter cake. How could I refuse? I’ve had a bit of a thing for raw chocolate ever since I went to the raw chocolate and wine masterclass at Laithwaite’s and I simply couldn’t pass it up. Delicious! Rich but not overly sweet with a hint of saltiness and a slight crunch. It melted in the mouth and then melted on to the plate if I left it too long, with the continual encouragement ” Eat faster, eat faster!”

Good thing I had the cake, because then I went on a boat to the Fram and Viking Ship Museum and didn’t get around to eating again for hours. I was starving when we finally arrived at ‘Burger Joint’ (rather cheekily shortened to BJ). We chose it because we were starving, it was close, and it seemed to be a bit of a hit with the locals. It was  just a hole in the wall, with a few tables and stools and a beaten metallic ceiling. No one stood on ceremony, and no-one seemed to care, because it was bloody delicious.

I ordered the ‘Juicy lucy’ – Beef patty, cheddar, chipotle mayo, sour dill pickles, onion rings, and a side of fries with black truffle, mayo and parmesan. I’ve never had an onion ring make me feel so happy before and the truffle chips were to die for. Then again, just hearing the word truffle makes me salivate and want to run towards it, in much the same way I always want to chase an ice cream truck. 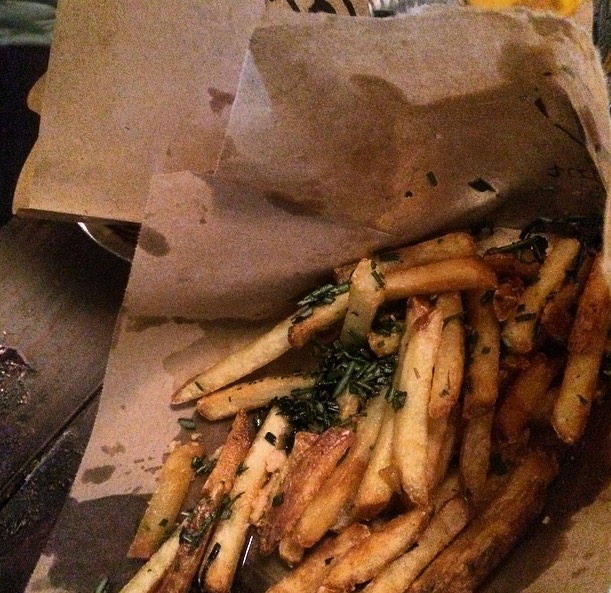 I will spare you the picture of the fairly revolting pasty I bought from a convenience store at 3am the next morning. I won’t lie to you, I still ate it, but some things are just not meant be shared.