I’m feeling a little guilty. I don’t suppose I need to be. Probably not. But guilt, just like love, or longing, isn’t always rational.

This story begins a few months ago with a conversation. I’ll spare you the details, It mostly involved my friend waxing lyrical about a most incredible piece of cake he had eaten. In fact, he was so excited about it that he told me the same story, about the same piece of cake, twice. I didn’t have the heart to tell him that, as he spoke, I was experiencing a real life moment of déjà vu. The cake in question was a lemon, rosemary and olive oil sponge. He had eaten it at the Picturehouse Central, which also happens to be one of my favourite cinemas in London. We had said that sometime soon we would go to the movies and share the cake in question.

Months pass, and we don’t. It’s not a big deal. We’re busy people. However, last week the new ‘Captain America’ movie came out. I wanted to see it. A work colleague had threatened to start texting me spoilers on the hour if I didn’t. Nobody likes a spoiler (except for my sister, but that’s weird). I invited a friend to join me, and as I waited for her to be characteristically late I scanned the cakes on offer in the cafe.

There it was. Waiting for me. Comparatively to the more flashier cakes on display, this one paled into insignificance. Truthfully, I’m not sure my eyes would have been guided towards it if I hadn’t been looking. It was just a modest sponge, cut into squares and completely lacking the bells and whistles of the competition around it. It reminded me visually of my mums honey cake for Jewish New year, which was heartening. I think my mum makes the best honey cake for miles. I bought it. If I have to wait for someone, I might as well do it with cake and a cup of tea.

The lemon was subtle, a bit too subtle for my taste. It existed mostly in the top thin layer, and I love a bit of tang. The texture though, was incredible, slippery and oily. The flavour of the olive oil was clearly evident, punctuated by delicate hits of rosemary. The sponge was light and airy. The slickness  of the cake moisturized my lips. I wouldn’t ever need lip balm if I could eat this cake every day. It was yummy. Though i’m not sure if it lived up to the expectations. Could have benefited from a bit more lemon.

Would I buy again? Maybe, though I might be more inclined to go for the orange cardamom next time. I did feel a little guilty that I took my friends cake sharing experience away from him. Though sometimes it works in life to live by a ‘you snooze, you lose’ philosophy, and then I figure… There’s plenty more cakes where that one came from. 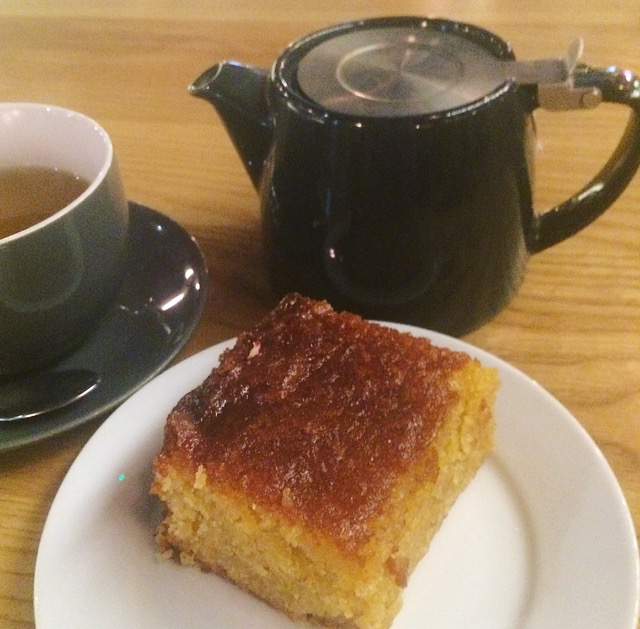